Through experimental animations, ceramics, comics, prints, paintings, and drawings, I explore forms that stray from their point of origin or intended state and morph into something new. I actively follow the mistakes, mistranslations, and tangents that inevitably present themselves as I work; the intersection of humor and failure is at the heart of my practice. I translate the sense of life, time, motion, and natural straying that occurs in drawn animation into my work in other media. I’m interested in the rules of cartoon logic and form, where the world and body are always in flux or caught in a repeating cycle. In classic character animation, figures loop and gyrate in a continual state of metamorphosis; death is not an end or even a possibility, but simply a humorous turning point. The drawn lines themselves are alive and vibrating. I attempt to imbue static forms with this same vibration and a sense of time, while playing with our instinct to anthropomorphize unrecognized forms as a way of understanding them. 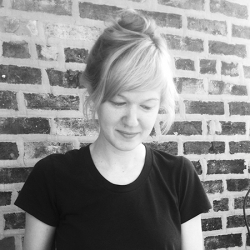