My interest in microscopic imagery began as a result of spending many hours in nature closely observing my surroundings. As I walked through the woods or swam in the ocean, I began to notice that everything I saw was made up of repeated smaller elements. I began to look at objects under a microscope noticing repeated patterns and visual rhythms. Mold, lichen, corral, cells, viruses, and bacteria and their processes of growth, decay and regeneration became the focus of my artwork. Each possesses a miraculous capacity for survival and reproduction, even under the harshest conditions. Each contains its own blueprint and alters its environment according to a predetermined set of rules. No matter what we do to try to control these organisms, we ultimately have no power over how they act. I think of these drawings as self-contained organisms. They float in their surroundings, some of them benign, others destructive. They interact with each other, sometimes in concert and sometimes in discord. Repetitive mark making imitates the process of growth; while cutting and eliminating parts of the drawing replicates the process of decay and decomposition. 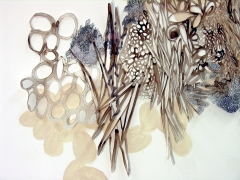 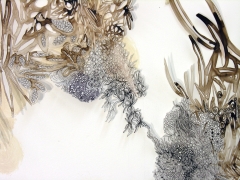 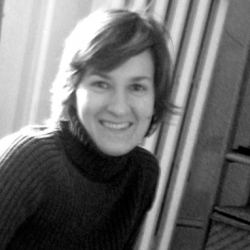