Within the subconscious our faults and fears, shortcomings and struggles manifest in corporeal form and appear as monsters that threaten our survival. In these dream world meanderings we follow the path of the mythic hero’s journey. The battles and trials faced along the way move us across thresholds of development and over boundaries in our mental landscape until we reach the core of our psyche. In this realm, the monsters/creatures morph while the definition of good/evil transitions from black-and-white to shades of grey. The primal nature of our impulses and their subconscious expressions are given the freedom to unfold in a place where moral weight and the laws of physics are suspended, and acts of aggression, violence, and sexuality move to “grey.” The heroines of my previous work have cleared a path through my subconscious, bringing me to this psychic core. Here, a new creature has revealed itself. This Jungian avatar of the collective feminine unconscious, or ANIMUS, has bubbled up from the shadows. 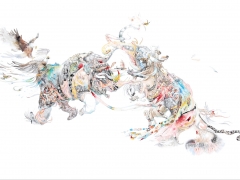 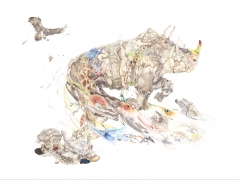 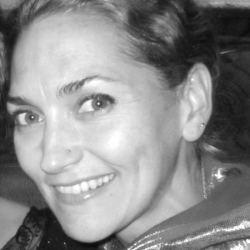