Composed of hovering masses of suspended geometric forms, which produce both faux and literal shadows on each other as well as on the autonomous background, these paintings thrive within a realm of ambiguous representation. The styles within the works are in equivalent conflict. On one hand, they subscribe to a historical notion of chiaroscuro, while on the other they produce the colored flatness of cut-paper collage. The tonal nature of the “conflict” that is taking place within these paintings, I feel, is similar to the territorial passion that community members display when something moves into their neighborhood that is seemingly unsavory, or unwelcome. Whether the new entity produces an end result that is catastrophic or somehow complementary to the status quo makes no difference. While it isn’t difficult to imagine these progressively intruding forms as symbols of development and urban sprawl, my desire is for the implied “conflict” itself to be the first, and lasting, impression. 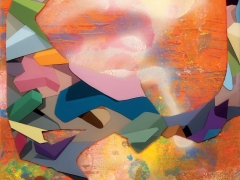 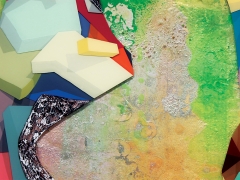 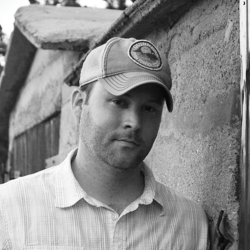