For several years now, I’ve been combining easel painting with comics-style storytelling. I had been painting a long time before I introduced the comics element. All the while, though, I was reading and looking at collections of classic comics and reading a bunch of great contemporary stuff as well. The comics artists were able to do what I wanted to do—tell stories and/or reflect on certain subjects of interest. Once I began adding original comics to my painting, I felt I had approached a new freedom that was very exciting. I like being able to explore narrative through characters who grapple with each other and with their own loves, hopes, and fears. Through these characters, I might explore science and nature, literature and philosophy, telling an occasional dopey joke, and so much more. Then I try to bring it all together to make a cohesive painting. The pairing of images is never random. The painted image and the comics are always connected, whether intellectually or emotionally. 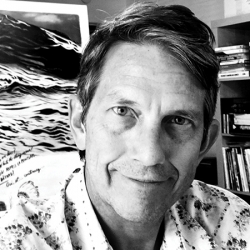