Katrina Andry’s work explores the negative effects of stereotypes on the lives of minorities, and how these stereotypes give rise to biased laws and ideologies in the Western world. Her largescale prints—some as high as five feet—confront the viewer with these derogatory cultural clichés. The prints feature figures in watermelon/black face. They represent those who are targeted by racist characterizations. However, Andry specifically uses nonminority figures in this role to illustrate the fact that stereotypes are unjustly perpetuated. Stereotypes are based neither on truth nor the innate characteristics of a specific person; instead, they are ideas forced on a group of people as a whole. Portraying entire populations in a negative light, stereotypes confer on the perpetuator an impression of superiority and greater sense of normalcy. Andry was recognized in the September 2012 issue of Art in Print as one of the fifty top printmakers. Her work has been featured on the popular Beautiful Decay blog. 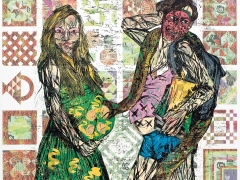 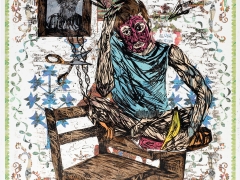 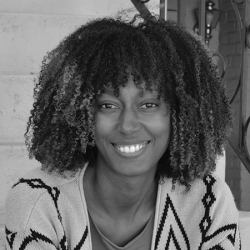