In my drawings, paintings, and wall installations, I obsessively render a continuous line to create intertwined, tubular forms. As I draw, I consider the effect of how the transmission of fluids and gases, along with pressure and gravity, would influence these imagined forms. The forms are layered, and they loosely follow aspects of linear perspective to become networks that reference the vast and intricate transportation, processing, and refining systems of oil, natural gas, and water as seen in our industrial landscape. In 2010, I followed the BP oil spill in the Gulf of Mexico through live video streaming. The video image of the pipeline seeping oil presented the earth to me as an organism suffering from a faulty and altered system. I have since referenced the pipeline in my work as a living, breathing entity, pulsing and growing with energy. My interest lies in capturing the ongoing shifting of power between mankind and the earth, as well as presenting the intermingling of manufactured systems and biomorphic configurations. 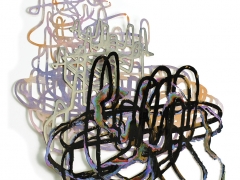 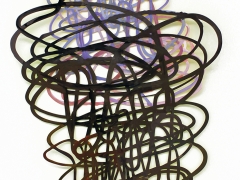 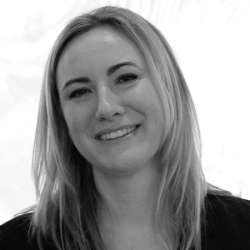