Referencing the concept: "the inanimate truth of factual objects spatially emptied by a personified line," I was concerned with the subjects' ability to serve as personifications of myself while also sustaining their own identities as common, recognizable objects. The use of raw materials such as burlap and gesso help to provoke a direct introduction between "myself" and the viewer. Currently, I have become increasingly interested in the rendering of surface textures within a two-dimensional plane in order to achieve a heightened sense of the original form. The scale, being actual size, dictates the subjects' imitation of the world. My process relies heavily on the recognition of self-inspection in regard to my ongoing position within the outside world. I believe the work tends to become in part, a documentation much like a journal entry. Within this idea, I seek to equally balance conceptual issues and formal issues with the realities of their contexts to achieve a deeper inspection of the world itself. 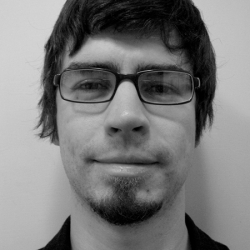