I have something like a virtual rolodex in my mind which contains not names and numbers, but years of reading, looking, shadows, dreams, art, and world events. Like a receptacle of experiences, my unconscious unfurls into a painting as described by chaos theory, with one small seemingly unrelated movement having an impact on the piece as a whole. The current paintings were my response to some poetry and the tsunami. Figures and objects became abstracted, then underwent disintegration and disarticulation. As always it’s an evolutionary process, where initial mark-making creates a conversation that I have with the canvas and the information in my mind. It’s not a literal dialogue but more a visceral and nonlinguistic response to the image as it is being formed. There is a great continuity between my practice as an analyst and the work I do as an artist. Both deal with unconscious influences that affect the way we see, live, and interact. What I attempt to do in this series of paintings is visually fabricate some of those influences. 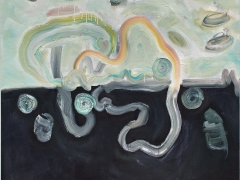 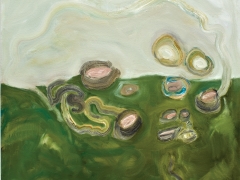 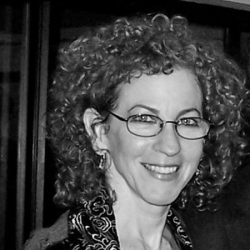