In God I Trust My current body of work investigates themes that counterbalance the tension of violence and war: building images that are simultaneously startling and provoking. Based on found imagery from the 60's and 70's as well as childhood memories from my Egyptian background, I attempt to explore the presence of God and my own Christianity in the context of tragic events. By including my examination of Coptic Orthodox and Byzantine iconography, these images are at once heroic and confrontational. Using the motif of the subject looking out (from ancient iconography), poised and unwaveringly confronting the viewer, the works begin to create an open-ended invitation for the spectator to commune with the work. The ambiguity of space and the unconventional notion of figure to ground relationship relinquishes the subject matter from its traditionalist figurative past instituting a contemporary cryptic narrative in its place. This notion of binding the abstract and the figurative consummates to form an image absent of physical space yet concurrently retaining pictorial depth and movement. Much like Rembrandt preferred the common imperfection of the daily mundane in his work, I try to capture the reality in a moment of truth, unabashed, unembarrassed and honest. The subject matter in a scene does not solely emphasize the action in the scene, but rather captures a moment that might be otherwise ignored. This moment frozen on a surface, yet emotionally fluid, submerges the viewer into the expanse of the picture plane and into an investigative discourse of our own poignant and frail mortality. 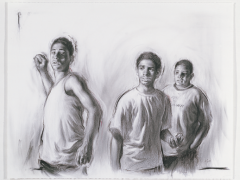 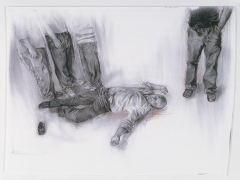 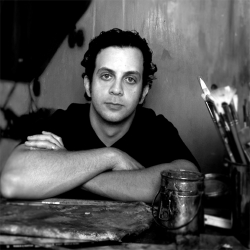