Within my painted universe, imagination is given primacy as a source for truth-seeking and world-building. This isn’t so different from the way nonpainted worlds come about. Recently, while researching how the prism refracts light, I came across a text that describes how Newton observed only six colors in the light spectrum. He arbitrarily added a seventh color, indigo, because he believed six colors would affiliate science with the occult while seven would keep consistency with the musical scale. This anecdote is a prime example of imagination stemming from cognitive dissonance (what Newton observed not matching up with what he believed) informing our sense of reality. The existence of seven colors in the light spectrum, a phenomenon never actually observed, is still a widely held belief. My paintings serve as an analogy for the ways in which the political is intertwined within areas of Western objective knowledge. As an artist, I’m invested in the potential of creativity to rethink other ways of being in, and learning about, the world. 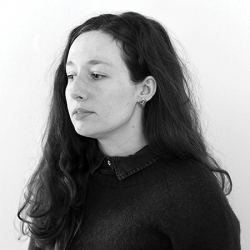