My recent work grew out of a response to the physical characteristics of the heavy watercolor paper I’ve been using over the past ten years. As I cut up and layered the paper together, the surfaces gradually began to build up in three-dimensional space. Light and shadows cast by the raised areas soon became as important as the colors painted with gouache. Now, treating the work as something between painting and sculpture, I’ve looked toward the tradition of bas relief. The depth and contours of a figure are communicated sparingly and efficiently in space while ultimately operating on the picture plane. With this in mind, I’m focusing on minute (sometimes microscopic) features of the body, isolating and reducing them to almost architectural forms and presenting them in specific yet open-ended ways. 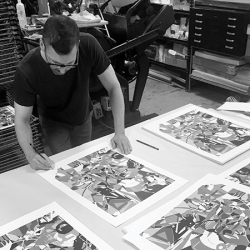