I am creating a land derived from carnivals and candy wrappers— a world of low-budget mysticism. It is consumable, disposable, and filled with the empty calories we crave. It’s a world just like ours, where the surface sparkles but the dirt lies just beneath. The large-scale watercolor, Tie Me Up, Tie Me Down, explores this dynamic. The image depicts a behemoth larvae-like creature, dangling from a web of sharp ropes in a sickeningly bright, plastic shrine. The creature is grotesquely overweight, squeezing hideously through the chords and appears to be dying. Tie Me Up, Tie Me Down is a representation of the American ego being sacrificed on an audaciously Technicolor pier. At the same time, however, offerings are being laid upon the creature, and new growth is appearing. This painting, created at the early unfolding of the current financial crisis, hopes for new ideas and new thoughts fertilized by the sacrifice of older more western-centric thinking. The image is a positive one, stained with a certain nostalgia for a cultural youth long past. 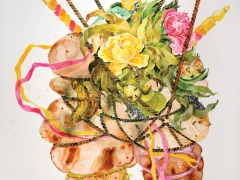 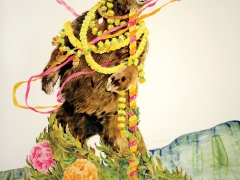 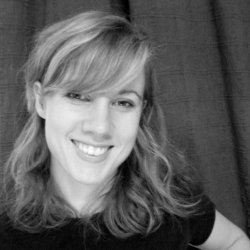