"There are some really beautiful landscapes in the world, but the human figures in them are poor, and you had not better look at them."
- Arthur Schopenhauer In 1982, in the back of a city tour bus in Calcutta, the guide kindly asked us NOT to take pictures while traveling through the poorest parts of town. Immediately after this request intermittent "clack-clicks" of the shutter of my SLR rang out as I stole my first images of shanties. Later, as a Peace Corps volunteer in neighboring Nepal, I made it a point to get to every large Indian city's slums for more photographs and have returned every couple of years (to India as well as other developing countries) to accumulate more experiences and images of what can be described as some of the most wretched living conditions on the planet. The cumulative material gleaned from slogging around in Third-World, sewer-carpeted hell-holes has become my muse for an extensive body of work I call "Slumscapes." Most often, the work created is a composite of my imagination, borrowing from my accumulated reference material and compromised icons of contemporary First-World materialistic privilege. Perhaps my aim is to share this unworldly, frighteningly-too-real glimpse of how fucked up things can get with people who have never experienced or cared to experience such things. 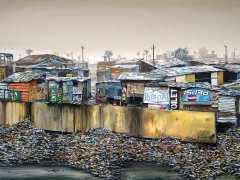 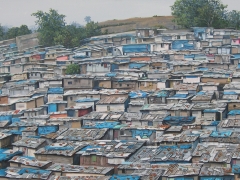 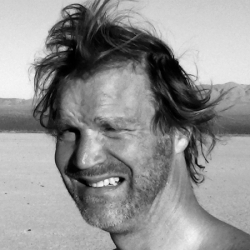