Elder Kinder explores the relationship between the limitations of social norms and freedom of expression, particularly the juxtaposition between the young and old. The raw freedom that is so much a part of youth often gives way to borders and boundaries placed on adult behavior. As we transition from adult to elderly, these raw freedoms often reemerge. As a child you learn to walk; later in life we learn to unwalk, literally and metaphorically. The dreams of the young, often sublimated by the years, never really disappear. Even a superhero, the ideal figure that our culture casts as a symbol of immortality, becomes a metaphor for the vulnerability that comes with the inevitability of aging. The images in this series can be seen as both humiliating and empowering. The pessimist sees the images through the lens of shame and vulnerability, weighed down by social convention. The optimist sees a sense of liberation, where an adolescent’s playfulness and the freedom to dream complement the wisdom of old age. 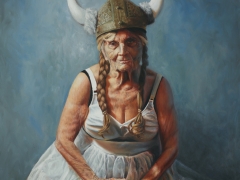 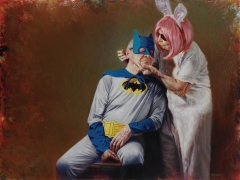 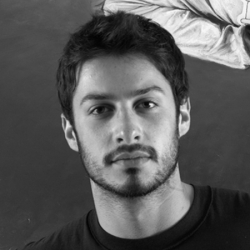