My work deals with the bewilderment and uncertainty of identity. The figures are integrated from multiple Asian pop sources and dressed in clothing from both Eastern and Western culture. The particularized scenography is a blend of Korean and partially demolished Western architecture. It is my reflection on the duality of being Korean-American. The Korean imagery is taken from traditional Confucian Sõwon architecture, from the Chõson period, and stylized Korean paper lanterns. Within the early Flemish-style landscapes are elements of Chinese, Italian and Korean cultures. By fusing multiple differentiated image-streams into one, I attempt to deal with the uneasy liminal quality of being between two cultures. Through the layering and interlocking of images, I create purposeful ambiguity through the exploration of scale, proportion, volume, paint and charcoal. By inverting the scale of the figures, birds, and buildings, putting painted passages next to charcoal rendered objects, and the layering of images, I am able to create a fractured yet cohesive whole. The work is built up to induce a narrative-like quality, yet the stories are meant as discontinuous ones. The paintings, to a greater or lesser degree serve as indicators of frustration and confusion within the everyday, as well as signposts of impending integration and resolution. 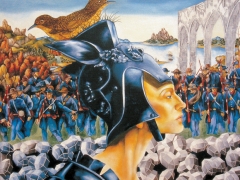 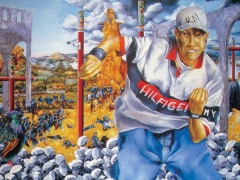 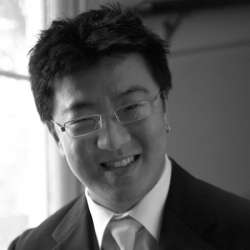