I think of these particular versions of objects I call styropoxy paintings as “seer screens.” “Seer” for the mysticism associated with mirrored objects, “screen” to refer to the concept of mirror-versus-screen as described by Jean Baudrillard: “We used to live in the imaginary world of the mirror, of the divided self and of the stage, of otherness and alienation. Today we live in the imaginary world of the screen, of the interface and the reduplication of contiguity and networks. All our machines are screens. We too have become screens, and the interactivity of men has become the interactivity of screens. Nothing that appears on the screen is intended to be deciphered in depth, but actually to be explored instantaneously, in an abreaction immediate to meaning—or an immediate convolution of the poles of representation.” I’m amused that these objects can be read by our contemporary eyes as touchscreens, their gradated color fields typical of computer art. Yet even as touchscreens, they double back to the function of their predecessors as mirrors. I’m less amused by the predictable impulse of viewers to touch the seductive surfaces, but I can’t blame them. 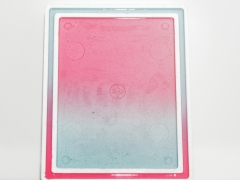 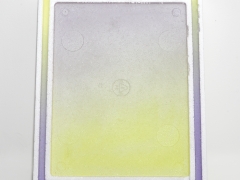 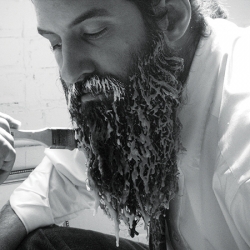