Several years ago, I began collecting screenshots of hugging scenes from movies. I was drawn to the visual performance of embracing—how the human figure can transform into a puzzle piece that seeks completion. Painting the scenes with a white backgrounds recontextualizes the empty space surrounding the subjects, removing them from the original narrative.
In 2020, after the first piece was completed, the world was suddenly in the grip of the COVID-19 pandemic. Over four billion people were sheltered at home, isolated and suddenly deprived of connection.
While in quarantine, I was doing research for the series and came across the book Exclusion and Embrace by the theologian Mirosloav Volf, which poignantly describes the drama of embrace as four acts.
“Act one is the opening of one’s arms, which means of an openness of oneself to the other. Act two is waiting. . . . Act three is closing the arms in which each makes space for the other while maintaining one’s own self. Act four is opening the arms once again, preserving the difference of the other.” 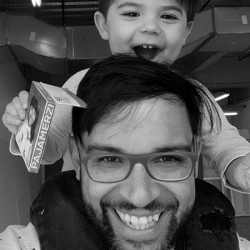