I make paintings, drawings, sculptures and installations. My work centers on the relationships between spirituality and the internal self. I am interested in camouflage and its uses in nature and design. Animal patterning is used to conceal and confuse, hide and protect but also warn and attract. In World War I, US and British battleships were entirely painted in geometric designs (Razzle Dazzle) to thwart and protect from attacks by German U-boats. I find attraction and repulsion an interesting expression of human relationships. In my current large format work I paint lines, which have the quality of calligraphy, and layer them in a variety of sizes and colors. This creates a density of line and color, which appear both full and empty. The process is meditative, reactionary and cyclical. The concentration of layered lines alludes to the possibility of infinity. The paintings represent a psychological barrier, a sort of defense mechanism formed by the ego. In painting abstractly, I am interested in creating visual barriers that block access to any direct personal information. Simultaneously, I use cartoon like imagery because it is both figuration and abstraction. Animal forms like dogs and cats represent the double nature in the human psyche. The familiar is rendered strange through narrative. Cartoon forms point to a suspended state of adolescence, a time in life when an individual's identity is in flux and in need of definition. I find it humorous to imagine Nothingness behind a great effort to conceal. Often the wall becomes the symbol of emptiness. Breaking down barriers exposes the individual to a collective community, which constantly contends with blockades to intimacy. 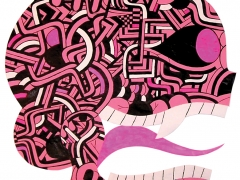 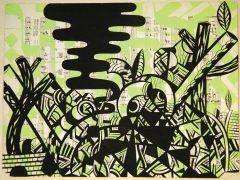 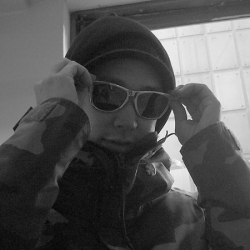