These are three paintings from a cycle representing scenes from the life of Felix Antonio Santamaría. Felix is eleven and a half years old and lives with his mother, Leticia, and his grandmother, Lucrecia. His father left his mother for a man when Felix was five. His grandmother is a poet and a zealous Catholic with a small cocaine habit whose mission is the salvation of Felix’s soul, and his mother is a tenured professor in the Gender Studies department of a prestigious university in Chicago. Felix likes: Michael Jordan, looking at the pictures in his mother’s office, and the forbidden pleasure of listening to his grandmother reading Cortázar and the Book of Revelation out loud (both of which his mother, an avowed atheist, has outlawed). He loves killing ants and going to the frutería with his grandmother and her gang of Mexican viejitas from the local Eucharistic Society, El Sagrado Corazón de Jesús. 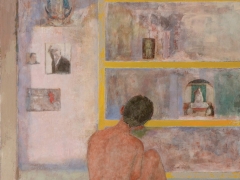 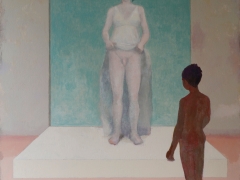 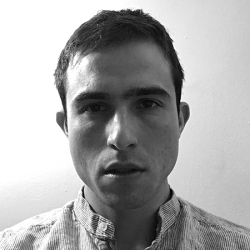