Hemingway works with photographs, often of himself, as points of departure for explorations of memory and identity, both of which he lost in the aftermath of a motor-vehicle accident over a decade ago. His work often depicts a solitary figure, or a detail, captured in a fleeting moment, entirely removed from time and place. Figures are static, contemplative in posture and clad in both literal and figurative armours; it remains securely anonymous, revealed only in body language. This armour, externalized identity, is represented in clear focus; while the ground in many of his works, however, is ambiguous and uncertain, demonstrating the severed identity's lack of a solid referent in time and space. 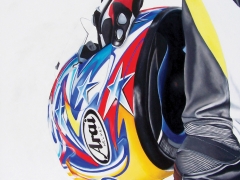 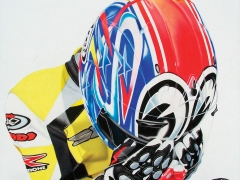 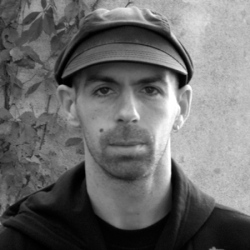