My work is often topical, dealing with issues of cultural control and commodification of the body. This particular series of oil paintings and installations co-opts religious gesture in order to reflect on the uneasy experience of our biological lives. Each of these paintings is executed on mahogany-stained panel. These somber grounds support pools of gesso medium; the shapes have a dynamic quality, as though the liquid were still in motion. The surfaces suggest skin, the pocks, cracks and striations of tissues. The oil paintings themselves, the figures, are captured within these puddles, rendered with an awkwardness that evokes both empathy and derision. In 2004, I spent several weeks documenting the murals of the remote Buddhist monasteries on the Tibetan Plateau. This work evolved both from my research in the temples of Asia and from my childhood experiences with Catholicism. Lately I have been presenting the body as religious iconography, corporeal experience as an alternative to religious thought. Exploring and understanding the body leads us to science; if the body is not mystified but embraced, and treated with an open-minded intellectual curiosity, we wind up in the company of scientists, of Darwin instead of Christ. By combining the human figures with animal forms- specifically with sea life, fish, jelly fish- I am referencing evolutionary theory and reinforcing our animal selves. By elevating the biology of the human form, by placing this biology in the context of a religious icon, I am advocating for humanity over religious doctrine. I believe that this form of advocacy is particularly required at this political and global moment. 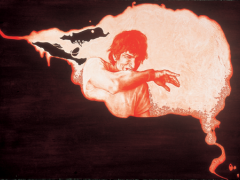 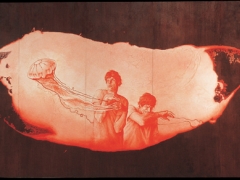 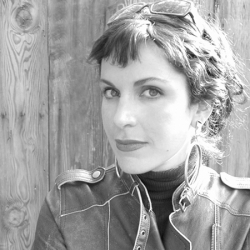