My life has been full of tribulations. I look at them as initiations. My father went to prison when I was seven for attempted murder. Although losing my dad was rough, his giving me two books, one on history and one on art, started my infatuation with both, and served as a means of connection with my pops. Similarly, art was a bastion of light after I returned from Iraq, and helped me deal with my guilt about the war. I tell stories that reflect my story but are not totally personal and are still in dialogue with the wider world. Where myth gives voice to the underbelly, the lumpen, in tandem with displaying the familiar and grandiose. My work tethers together seemingly opposing ideas as I teeter between the personal, the historical, and the political. I approach my art practice with the certainty that my position will shift on many things given ample time. I see my work as history painting promoting the obscure, the forgotten, and common knowledge. Reflecting on the absurdness of history, I mean, whose history is it? 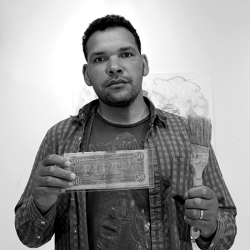