I first saw John Ford’s Stagecoach (1939) at the University of Colorado in the mid 70’s. The print was battered, the images de-resolved, flickering and stuttering. Details of the coach, horses and characters dissolved in abstract shadows as the searing glare of the Arizona desert spilled into the auditorium. In its ruined state the old film seemed like a relic of an actual frontier. Stage twentieth century Hollywood history is as real as the nineteenth century blood and thunder epic of conquest and conflict that inspired it. John Ford made Monument Valley an historic place, better known and more resonant for most people than Little Bighorn or Wounded Knee. The people in the film are equally part of the history of the West. The subjects of the films are great subjects, the realities and myths they depict as grand and tragic as any in the world. I can’t imagine more vibrant material for pictorial art, and I’ve long drawn inspiration and images for my paintings from film. Settings blur or dissolve in light-shot dust as bandits, cowboys, cavalry troopers and Indians ride. Emblematic of vitality, fearlessness, austere self-reliance, and intimacy with nature, my work is darkly nostalgic, haunted by the legacy of popular western imagery and the savage, tragic and, yes, heroic aspects of human nature and history portrayed in it. 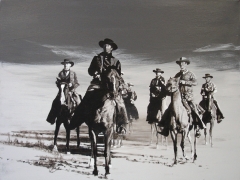 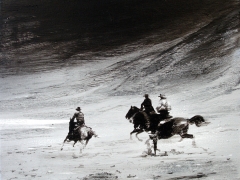 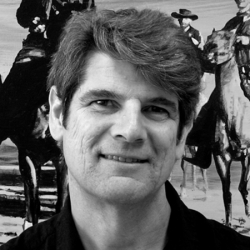