The Glo-Pods are autonomous, independent, nonreferential objects that hover between materiality and immateriality, providing the viewer with varied perceptual experiences. Transmitting, reflecting, refracting, and embodying light, they activate the surrounding space and transform it. Because the Glo-Pod forms are amorphous, asymmetrical, anthropomorphic, and/or biomorphic, they appear to be artificially mutating, morphing between solid, liquid, and gaseous states. My goal is to bring about intriguing perceptual contradictions between visual/ sensory elements such as mass v. lightness, solidity v. delicacy, opacity v. transparency, muscularity v. femininity, and intensity v. nuance. Through a proprietary process of embedding light in the objects, I create the appearance that the Glo-Pods have a life of their own. Pulsating with energy, glowing with internal light, they allow for exploration of the phenomenology of light, color, materiality, and space as we experience it through the human lens of the senses. In its most basic, reductive form, the work explores conceptually the primeval link between man and light. 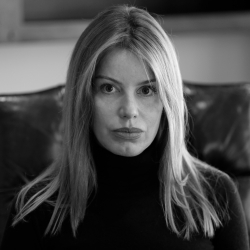