These cutout paintings on thin Mylar are attached flush to the wall, appearing to merge seamlessly with its surface. The paintings incorporate the wall itself into their spatial illusions, suspending the images in a zone of overlap between real and represented space. Scaled to life-size and hung low, these works function between painting and sculpture, despite their near immateriality. The flat silhouettes of highly dimensional forms circumvent the pictorial nature of painting to “become” the objects they represent. The imagery is derived through a process of visualization. Although they appear “real,” the forms are entirely fictional and invented through drawing. Constructed from my imagination, the everyday subjects have an concrete yet emblematic quality that feels outside of a specific time or space, like a memory or dream image. Natural and manmade objects seem inhabited or alive, and often show a trace of human interference, suggesting a narrative that lies beyond what is represented. 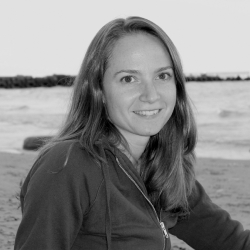