It would be nearly impossible to sculpt the landscape of the state in which I’ve lived for half of my life without including its many non-indigenous invasive species, such as cowboys, kudzu, Southern Baptists, decomposing automobiles, Grass Carp invasions, and Confederate flag bearing Rebels. Constructing dioramas of the South enables a certain degree of lighthearted judgment and stereotype that this work thrives on. However the intention isn’t to degrade the subject matter. Being one of the many non-indigenous invasive species that didn’t migrate here by choice, I’m completely enthralled by the state’s laws, traditions, and dialect. Due to gentrification, the scenes in which I paint are starting to diminish. Possibly cultural museums in the future will be laden with meth labs, worn Merl Haggard records, and replicated figures of the wonderful folk who used them. Seldom relying on sketching, I choose to make models or take notes and cull until a single scene is ready to be constructed. Once photographed the illusionistic qualities of the models materialize producing a mediated view of an often-misconstrued region. 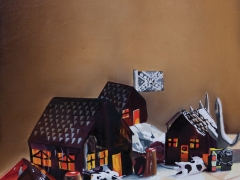 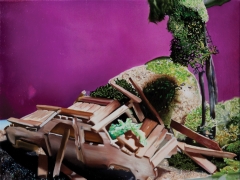 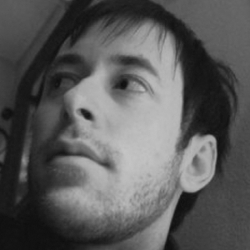