My recent paintings explore the physical culture of affluent domesticity and contradictions embedded in upper-middle-class liberal environments. We borrow, aggrandize, and fetishize our objects, rituals, and aesthetics, subsuming their original identities into our cherry-picked displays. The items that adorn these spaces subtly denote class and race. Certain objects such as masks, while existing as ornamental objects in domestic spaces, also symbolize facade and point to tangential issues of cultural appropriation. Not so differently, seventeenth-century Dutch still life painting simultaneously documents and allegorizes the lives of its subjects through a complex set of signifiers. I’m interested in using this mechanism as a self-reflexive tool for exposing the insularity and often camouflaged cultural paradoxes that pervade environments such as the one in which I was raised, in Boulder, Colorado. Disparate adjacent painting languages, stark edges, and compositional tension create a cocktail of affects that approximate my ambivalent relationship to home. Ultimately, I hope my work can ask questions around whiteness and complicity. 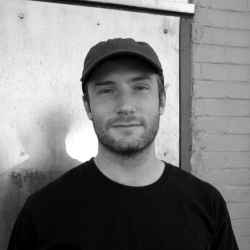