The work forms by plotting an intersection, a sight where visible and invisible trajectories intersect to form a new action, an encounter, a potential for different realities to interact with one other. A story begins to weave itself, but gets entangled in minute details, surfaces and textures. The final outcome may result in inversions, optical discrepancies, and kinesthetic shifts. Space remains ephemeral. At times resembling a construction sight, an abandoned industrial zone (suburbs of Saint Petersburg, or Brooklyn's Gowanus Canal). Among recognizable elements are various structures, rocks, puddles, overgrown shrubs, ropes tied to trees, cracked cmu, wooden crates, tiny holes, and even smaller fragments. The pictorial tissue develops from things that are 'caught in the nets' so to speak. I am interested in visualizing narrative chains, sequences of objects and events that follow one another contiguously, or associatively. I focus on the minute, skimming over surfaces, gradually unfolding them. Collapsed into a two dimensional plane these structures appear to slip, scatter or tumble depending on my initial steps; the resulting truncated sequence could resemble a fragment of a narrative, a sentence or a musical phrase. 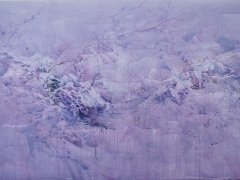 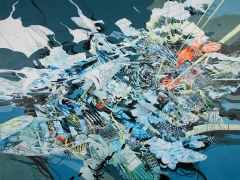 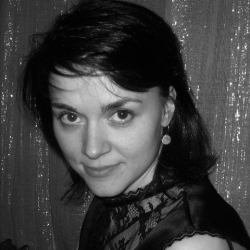