Queer culture and visibility are more important than ever in a moment where queer identity and queer bodies are under attack. Painting has a responsibility to its own history but functions powerfully as a tool to combat the dangers that queerness is facing. My work is fiction that attempts to elevate queer realities to the level of mythological canon. Queer culture mythologizes sex and sexuality as equal parts abject and the ultimate out-of-reach experience. It’s both normalized and sometimes beyond reach, existing singularly as a dichotomy. In my paintings, queer identity is coded to exist hidden in plain sight, coexisting between oppression and desire, a chimeric blending of coexistent realities. In the natural world, bright colors and intricate patterns in animals act as a warning. By decorating figures the same way, I try to seduce while maintaining the same level of danger. I am drawn to monsters, half-man half-beasts in particular, which always functioned in mythology as the symbolic interruption of heteronormative coupling. In the worlds I create, these figures are both normal and desirable. 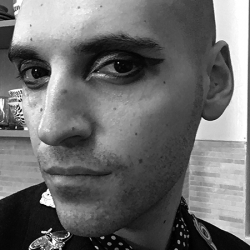