Having grown up in the interior of British Columbia, in a small railway and logging town on the Trans-Canada Highway near an area with the highest incidence of avalanches, with a dam and a ski hill, and attempts at small farms, I am concerned with the intersection of areas of human settlement and the environment. I am interested in the man made controls humans have had upon the landscape in the forms of clear-cuts, avalanche-forecasting and control, damming and periodic flooding. These particular works, through their bird's eye view and illustrative style, represent a questioning of our cartoon utopian visions and are thematic interpretations of ownership, manifest destiny, colonization, and territorialization of our forests. An entropic terror is represented through skewed mirrors and memories of landscape sketches, which have traditionally functioned as the notations of the vanguard of human exploration and expansion, or as visions of painters steeped in John Ruskin's academy of the sublime or picturesque. Whether in my paintings or in reality, the practice of clear-cut logging represents a projection of the psyche onto the landscape, and through the inscription of texts that question notions of authority, these works try to establish a sometimes ironic or humorous dialogue within the tradition of Land Art and Landscape painting. 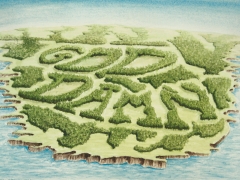 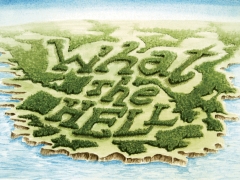 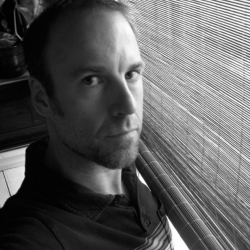