My recent paintings show an ongoing interest in representation, reproduction, origin, and iteration. The work explores the spaces between material and simulated states through a layering of references, formats, and fidelities. Like a concrete poem, where form mimics content, the works often include a combination of images and objects that refer to their own structure and making as well as to inherent problems and long-standing tropes of representational painting. I attempt to balance a disparate range of materials, techniques, and external sources in works that can occupy multiple states simultaneously. For example, a cast orange peel might function as a monochrome painting, the idea of the color orange, or an analog to the task of the cartographer. I’m interested in pointing toward an underlying instability, which, while bolstered by ongoing developments in digital technology, has always been inherent to the relationship between object and image. 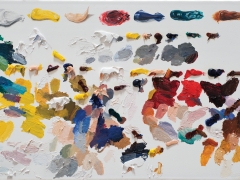 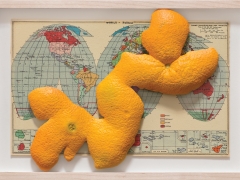 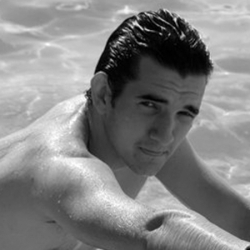