“One is taking the material of the world, imposing a set of forms on it in a very concentrated way, to actually reinvest our existence with meaning.”
—Tony Cragg Agnes Martin spoke about painting as a way of turning her “back to the world” and finding a place that was quiet, beautiful, and empty. I have tried to look for that place—within—the world, and the violence, anxiety, and destruction that occupy it. I have centered my search around places where—culturally—violence and spirituality/morality, or violence and progress, have been thought to align: I’ve looked to traditions of animal sacrifice, war, modern medical practices, and the slaughterhouse for source imagery. In each case, I subject that imagery to a kind of simplified rationale by overlaying it with geometric structures, obscuring or veiling it, or simply isolating and removing it from its context. My hope is that, by subjecting the original violent act to the concentrated actions and forms of painting, I can reveal new kinds of meaning. 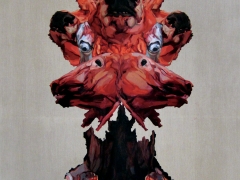 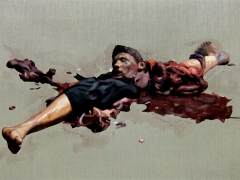 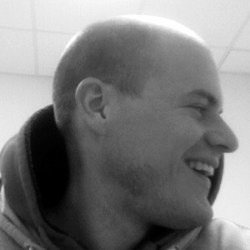