I've been seduced by the potential of the imaginative and otherworldly since the very beginning-since I was little I've always lifted the curtain on the window with feelings both of terror and exhilaration, anticipating hideous and glorious events happening on the other side.as in Mary Poppins, Pan's Labyrinth, Bedknobs and Broomsticks, MTV's animated series The Maxx; scores of books such as The Neverending Story, Dr Doolittle, Danny, Champion of the World, Life of Pi, and Where the Sidewalk Ends. I conclude with Where the Sidewalk Ends because I am precisely interested in this concept: on its' cover a young gender-less creature peers over the crescent of sidewalk that comprises the end of the world as we know it -- the end of the world and the beginning of our imagination. Like the bystander at the sidewalk's edge, I'm looking over to a remembered place that doesn't exist, a world in which I belong but don't live. My view is almost voyeuristic, and is almost always of a relationship between creatures, animal and human, depicting a secret moment frozen in time. 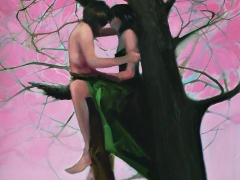 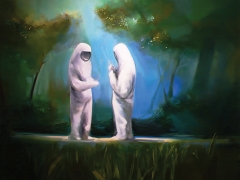 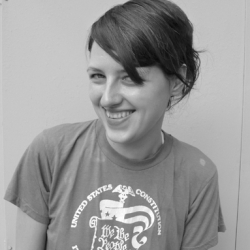