My current series of paintings is about Mexican/American border issues, the popular culture of advertising, television, movies, Internet culture, Latino or Mexican American identity, border politics, art and political history, and current events. My father (and other ancestors) was born in Mexico, immigrated legally to the US before the 1924 Immigration Act created the notion of “illegals.” He served in World War II combat in Europe and was awarded the Purple Heart for war wounds suffered. He later worked for the railroad in Tucson for thirty-two years, married my Tucson-born mother, and helped raise our family. He was successful and fulfilled his version of the American Dream. I feel most immigrants are much like my father; they deserve a chance to contribute constructively to American society and enrich our country, the USA. 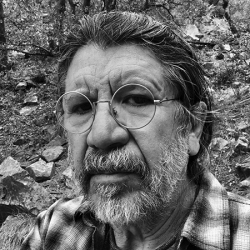