I mine dualistic tensions and harmonies between brute and elegant, baroque and minimal, high and low art. The work questions perceptions and investigates other realities from a post-colonial backdrop. Rather than reflecting something that currently exists, my work reflects content from an alternate reality. My interests emerge from Rasquachismo and its associations with low-fi sound utilized in indie music culture and kitsch. I utilize both traditional and non-traditional art materials, with a focus on second hand materials. I’m inspired by metaphysical literature, b-movies, analog machines, imbricated harmonic textures, and Texas-Mexico border culture. My work is an attempt to break bread with worlds created by David Lynch, Guillermo Gomez Peña, David Cronenberg and Aldous Huxley, premising a bizarre, post-apocalyptic alien land where border dwellers generate steam p(f)unk. These paintings act as relics, where a twisted sci-fi meets the barrio’s alternate reality; the product of a larger decolonizing enterprise that functions from what Walter Mignola calls ‘border gnosis,’ or knowledge developed at the borderland, taking form at the margins of the modern Western world. 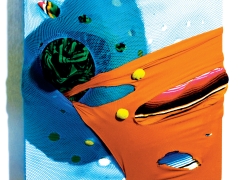 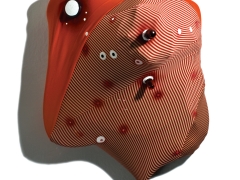 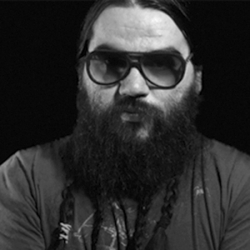