With my paintings I am investigating my own background, both at a young age and during my formative teenage years. Growing up in a rural community, I was surrounded by hyper-masculine behavior, drugs, alcohol, violence, right-wing political views, and misogyny from both my peers and my father. It seemed to be a trend for young men, including myself, to follow their parents’ every footstep. Rather than empathy, I was taught how to fight. Rather than loving my friends, we drank. I never felt like my true self. I was a reproduction of my surroundings. Growing older, I have seen many flaws in the way I and other men are raised. I grew up poor and my parents frequented both prison and county jail. Rather than crying, humor became a way for me to cope. Between comedy and my sense of form, I am recreating the aggressive, violent, infectious, and artificial nature that surrounded both me and others. 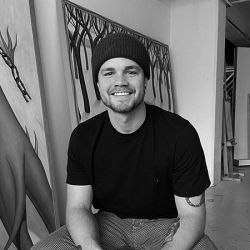