Patterns migrate off of their native fabrics, forming incomplete and overlapping narratives as they recombine, fluidly creating new motifs. Body parts are deceptively recombined to create impossible figures that slowly reveal themselves out of chaotic folds of fabric. My painting process becomes an intricate puzzle, combining the layering of patterns with an illusion of shallow yet palpable depth. I am influenced by modernist formal reduction and studies of geometry. I collapse figure and ground, abstracting my images into geometric angles, lines, and shapes with occasional moments of defined rendering. In contrast to my reductive influences, I often use dramatic poses and lighting drawn from Baroque and early impressionist painters, creating chaotic images of moving patterns, clashing colors, and entangled limbs. Drawn to figurative painting by the human connection of working with models, I bring others’ stories and identities into my practice with a voyeuristic sense of curiosity. 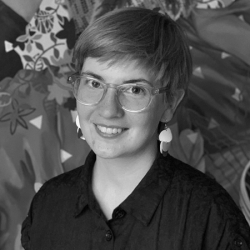