In 2001 I moved to southern Illinois from Glasgow, Scotland. While in Scotland my work dealt with objects connoting certain social conditions. The change in my environment and in patterns of living effected a change of focus in my work as well. These paintings document mundane contemporary landscapes and urban environments and interiors throughout the United States of America. The images are taken from an inventory of material that was gathered over a period of 18 months. The process by which the photographs are used to produce paintings involves several translations. These translations distort and create mental distance from the locations initially represented in the photographs. Through imagination the work then takes its own path, creating a certain atmosphere and mood. The images allude to environments and situations, and yet become indistinct enough to elude the particular. They become fragments of information that when placed together begin to suggest a possible narrative. The distortion and fragmentation introduce a film-like quality. There is a sense of movement and blurriness of focus that can be seen in films, particularly those produced by hand-held cameras or newsreels. The actual filming is not clear cut, with all the elements in focus; instead there is a grittiness and immediacy in the capturing of an image or situation. The monochromatic paint, fragmentation and distortion confer a bleak and empty atmosphere within these paintings. The qualities of visual perception they create address certain aspects of contemporary urban environments. There is a sense of constantly being in transit, of rapidly losing time. At the same time, there is beauty and poetry in these images, as the paint describes the geometry of the built environment. The visual beauty commonly found in nature has here been exchanged for that found in the built urban environment, and the attendant emotion is cold and distanced. 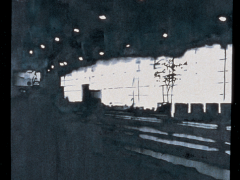 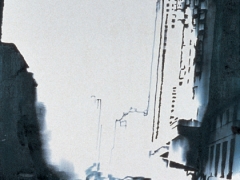 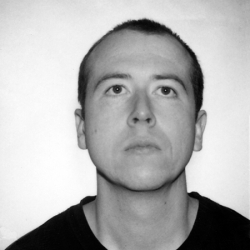