How do certain visceral qualities of urban decay influence our experiences, memories, and, ultimately, our sense of history? To answer these questions, I use a multidisciplinary approach and study specific locations purely through the opacity of distant and fragmented recollections: an attempt to record the subconscious impressions seemingly ignored spaces leave on us.

Formally, my studies delve into the relationship between physical decay and deconstructive abstraction. By studying synthetic systems under duress, I try to showcase the interplay between geometric rigidity and the organic authenticity of decomposition.

Having been exposed to revolution and war in Iran, my encounters with death/destruction have allowed me to draw parallels between building deconstruction and the despair, yet resiliency, of their exiled inhabitants. These moments, which span fluidly from demolition to renovation, form the foundation of my imagined dwellings.

By blurring the boundaries between progress and ruin, I make an observation regarding the misguided inevitability of evolution. This post-futurist viewpoint is a corollary to idealist mid-century thought and its embrace of utopian visions. 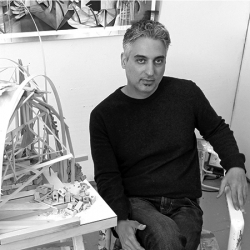