My greatest influence today is advertising, whether it be a billboard, an Internet popup, the side of a bus, or a television commercial. The world in which we live contains thousands more ads per month than the previous generation saw. It is impossible to escape from the branded, corporate domination of Earth. At sporting events, the arenas all bear the names of conglomerates. In Japan, most baseball teams are named after corporations. Even the front page of the LA Times features advertising, something unheard of a decade ago. Rather than ignore it, I choose to embrace branding and commercialism as a fact of life, and have them to play a large role in my painting. I often incorporate logos into my work, much as a billboard or advertisement in a fashion magazine would do. The other overriding theme for me is our collective inability to remain present in the moment. Most of us are unable to refrain from constantly looking at our phones, iPads, and laptops. People meet friends and lovers in public, but spend much of that time texting others. The combination of these two themes provides the basis for much of my work. 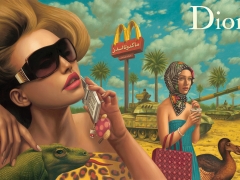 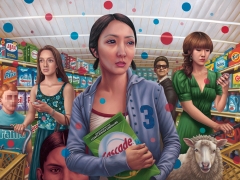 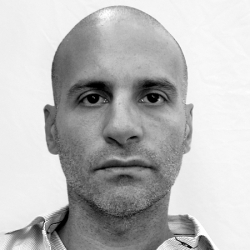