As cultural gestures shift with an ever-escalating pace, the ideological substance behind them becomes more fixed, flat, and clichéd. This rapid shift has the potential for glitches. It is these small transitional failures of communication that occur in between styles and ideas that I find particularly interesting. Some of the work deals with the ways in which idealism can transition from catalyst to vehicle to hurdle. There are images of soiled martyrs, ruined military and didactic spaces, and trumped-up masculinity. The connecting tissue is the slippage between promise and result, between idealism and ideology. Having long been concerned with modes of ideological breach, I find myself shifting focus from the failure of systems to systems of failure. My work, which purposefully avoids having an optimal viewing distance, is not only aware of its own failures, it focuses on the mechanics of failure at large. It is less fascinated by traditional transgressive gestures—by externalized irony—than by the transgression of the gesture itself. It is about, in the aggregate, the awkwardness of growing older. 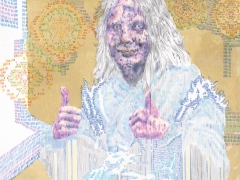 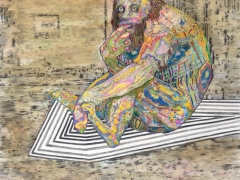 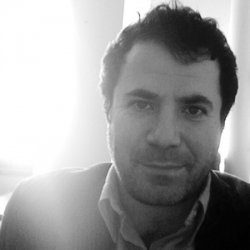