I developed the series Object/Window/Both/Neither while renovating a homesteader cabin in the Californian Mojave Desert. Painting the interior walls a glowing white made the landscape pop in through the windows, becoming an object, and the walls recede into the background. The effect reminded me of an eye game familiar from childhood, where a shift in focus inverts the relationship of figure and ground. The works in the series are both sculptures and paintings, windows and objects. I often wander the desert, watching the light flatten and sculpt form. Here the land and plants continually shape-shift, volumes erode, erase, and reconfigure. The palette is derived primarily from the sky at dawn and dusk; the preliminary sketches for the pieces are photographs made through shaped frames that isolate a small portion of the sky, removing context. In its viscosity, the paint emphasizes the contrast between the super-glossy and ultra-matte colors, which vibrate off one another to create a moiré effect. The viewer is asked to walk around the work, paralleling the act of viewing sculpture. 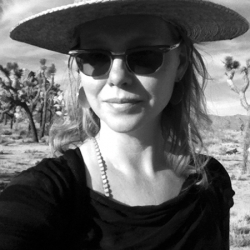